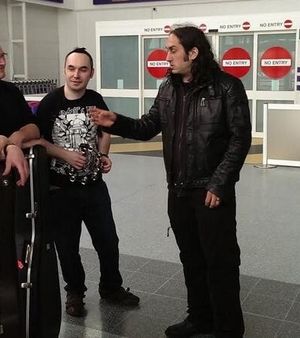 So, while Luke decided to do an improvised musical number with UK comedian Ross Noble (in the sprawling arena that is Newcastle international airport - don't ask).  Everyone else knuckled down and got some real work done…

Chris and Stefan have been hard at work rehearsing those rhythm sections and have now nailed down the final grooves for what will be their official Gandalf’s Fist debut as full time members!

It was great to have Chris down for the weekend putting the finishing touches to the bass sections – it gave us time to reflect on some additional compositions and, as expected, resulted in us cranking up the ‘rock’ on this record… tenfold.

So now it’s all done – drums and bass in the bag! There’s been some great drumming from Stefan especially on the longest track on the album… there’s some sections in there that sound like either:Personally, I’m going with option ‘C’.
I really am pushing on now with guitars and vocals… there are one or two lyrical pieces to tie up too!
I'd wager we've got maybe 3-4 tracks that are 96% done and ready to master and the others are well on their way!

The guys are sounding on top form - we can't wait to release this one to the world!!