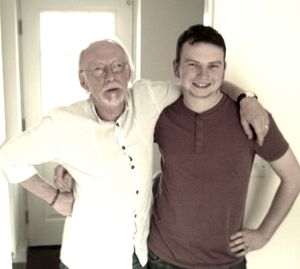 Well, well well. if you thought that me and Luke were the only two blokes that were going to go all folky on a Gandalf's Fist record you were sadly mistaken!

It's with great pleasure that I can announce that Dave Oberlé, vocalist and drummer for 70's Prog/Folk band Gryphon will be appearing on the new album!

As a Gryphon fan this was a bit of a treat - We'd recorded a folk section featuring Troy Donockley on the bouzouki and thought Dave's vocal style would be a perfect match... and we were right!

Dave came up and recorded his parts whilst Chris and I were tracking his bass sections, which was a good laugh - Dave is an absolute gent and had many a tale to tell... he didn't even complain about Chris' incessant questioning (or even question why he was dressed as the man from del monte wearing a home-made AC/DC t-shirt for that matter!)

The track Dave features on is quite a sad and melancholic piece that, as it stands, will probably be the penultimate track on the album... it's a cool little number that draws a thematic motif, that carries throughout the record, to it's final conclusion!

Afterwards, this is what Dave had to say about the experience:

"I was delighted when Dean approached me to play a small part in the recording of this album. Having listened to previous Gandalf's Fist albums I had been very impressed with the standard of musicianship, composition and production. I tend to be rather selective these days about what projects I get involved in but this is most certainly a band to watch out for."

Which was very kind of him to say so!

As well as laying down some vocal tracks Dave is also plays the bodhran on the album - which again, has really added something to the mix. I suppose it appeals to the Irish Blood in me but I think it's a great sounding percussion instrument and has given a bit of 'gusto' to the intro to the track! 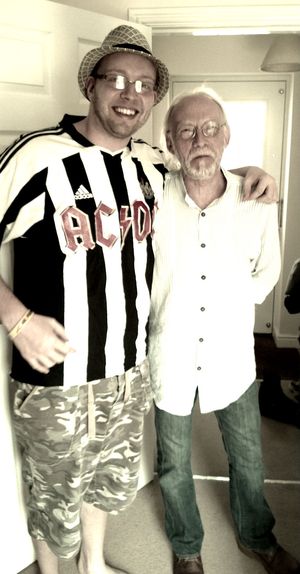 If you're not familiar with Gryphon (well you bloody-well should be) they were a really great, unique band that used traditional medieval-style instruments such as Crumhorns in their music... perfect! I could go on for ages but Wikipedia is your friend.

My out and out favourite track has always been their version of "The Unquiet Grave" - a traditional folk song about a young man mourning the loss of his love... Check it out below - great haunting Vocals from Dave and an atmosphere in this track that is like nothing else!