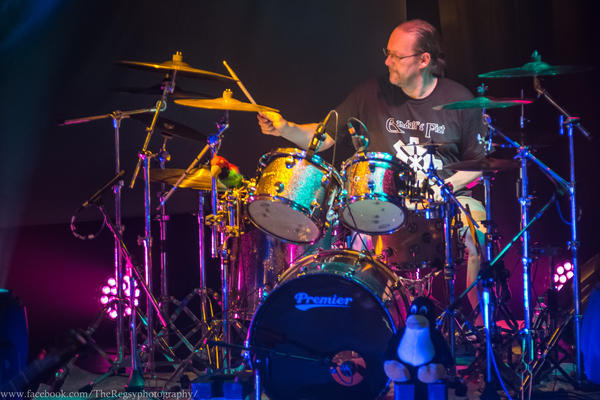 Procreated when King Crimson recorded "In the Court of the Crimson King", born shortly before "In The Wake Of Poseidon" was released - it's natural this guy became a Prog-Head.

But first there was other music - music he learned from his surroundings - Deep Purple, Judas Priest, Iron Maiden, Black Sabbath, Pink Floyd - he was always drawn towards music from the 70s, towards "the beginnings" of real Rock-Art. Stefan began drumming quite late - at 18 years he decided that he'd banged enough on cardboard-boxes and bought a real drumkit.

Several Bands (including an "Evil Majestic Black Metal" Band with recording-contract) later, destiny struck - he discovered "Tales from Topographic Oceans" and was in love at once.

After catching up learning about the likes of Genesis, Gentle Giant, King Crimson, Van der Graaf Generator, Yes and Caravan - to name just a few - he began reading Magazines about his new love.

Pair his love for Fantasy literature (especially by J.R.R. Tolkien) with his love for Prog, and it's clear that it was only a matter of time until he discovered Gandalf's Fist. Actually, it was in "Classic Rock presents Prog"-Magazine No. 28 - a one-page interview with Dean and Luke, which aroused his interest. Quickly after that he bought all releases so far - and simply asked the guys if they could use some help on drums.

Stefan appeared as a guest musican for the "A Day in the Life of a Universal Wanderer" album and was promptly promoted to full band member following his thunderous performance at Planet Rockstock in 2013.