How a Song is Born

First Blog Entry from New Drummer Stefan Hepe Right now, in the hot phase of writing new material for our coming album, I thought it could be interesting for you to know how we work... 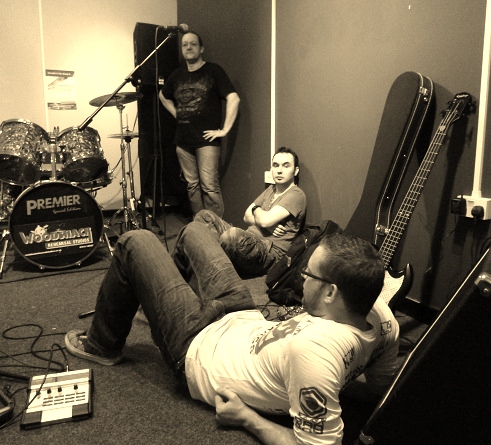 Allow me to use a short production clip from the upcoming record as an example. More oft than not Dean comes up with an idea for a new song. He then sends me the basic guidance tracks, along with some track information (135 BPM, 4/4 in half-time feel, after 7 bars we get into a swinging part, etc). Those tracks usually contain Synth/Piano and/or guitar, sometimes accompanied to some basic drums, mixed together as a mp3 file. Along with this I also get a guide-track with the same content, only the drums are muted (that's what I use to record my stuff to). This is what such a track sounds like:

I then import those two tracks into my DAW (Cubase is my weapon of choice), set up the time signature- and tempo-tracks according to Dean's notes, and listen to his guidance drums (if there are any... sometimes he has something very specific in mind which I try to cover as best I can!)
And then I drum. And write. And drum. And change. :)

At the point I feel ready to record my ideas I record the drumtrack directly into my PC... When I'm satisfied, I check the note velocities, position, delete double-triggered notes and tidy up the whole drumtrack. We now have something that sounds like this:

Again, a mixdown of all audio (Deans Track(s) without drums plus my drums) is exported as mp3 and sent towards Dean. Once we both agree on overall mood, arrangement, drum rhythm and fills, I begin my part of mixing down: the drums. Using EQ, compression, reverb and some other nifty little tools (depending on the song), I'm then ready to do another mixdown - a stereo 48.000 kHz, 24 Bit Wave-Audio track of my drumming without anything else. It now sounds how I want my drums to sound like!! Here you are:

Then Dean and the rest of the band (Christopher, Luke) add their parts to the song, sometimes at this stage we also have guest-musicians who contribute to it. 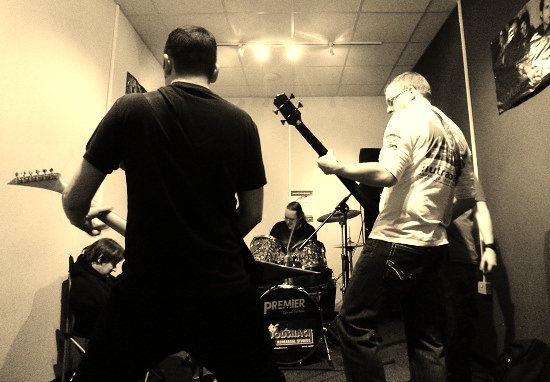 Every now and then I get a new mix from "work in progress", which is really exciting. Comparing the soundfiles we began with until the final song, witnessing it grow - it's an unbeatable experience!

So, in our example-song I used here, I can also provide you with the current "work in progress" state, which currently sounds like this going into the vocal recording phase...

So - just a short, simple section...We've just finished the first part of vocal recordings for this track and it's starting to sound rather epic indeed!
More samples soon!