From a Drummer's Point of View: Melodies and Themes 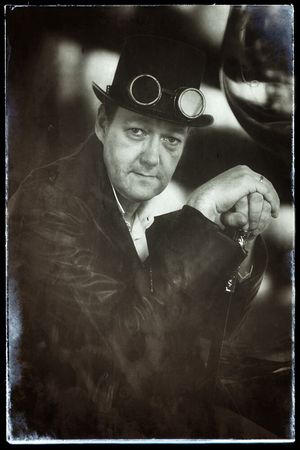 One Drummer: Awaiting the next Zeppelin Shuttle.

So then, you’ve all visited clockworkfable.com and delved into the story-background there, right? If you missed it, do it now - I'll be waiting here for you.

Oh, you're back already? Now then... there you have it: a 3-CD album. Believe me, this wasn't intended when we sat down to begin writing the next album.
But let's start where the concept was born. We already had some music and melodies together, when Luke arrived with the concept.

Ideas about the narration/”radio-play” bits were there rather early during the planning stage (as we did on "A Forest of Fey"). On "Forest..." it didn't turn out really well, we had some bits recorded, including a section about a bike-riding weasel, but they just didn't work. The flow of the album was interrupted by them rather than the songs benefitting from the narration.

But this time, we had a rather different approach: We wrote a complete story. A complete 50 page script.

Collaborating online, we had the opportunity to write whenever we had the time to, or simply add an idea for the story itself. Whenever someone had an idea, he put it online. Religion? Sure, there's two factions... If there is a daytime-cycle (even without day and night changes in brightness), they do need a proper daytime-greeting, right? And when it's all dark, they need some decent alphabet to write (or scratch their words into rusted metal or the swampy muds of Porfan). All this went in sync with Dean's songwriting and the ideas were polished up into the narrative story arc that exists today.

So, in order to interconnect the narrative with the songs, we decided to have melodies, or “themes” which are revisited throughout the whole album, slightly changed each time, to represent the main characters (or actions) within the story...

Reoccurring melodies aren't new on our albums. It happened on "A Day in the Life of a Universal Wanderer" and it was pushed forward in "A Forest of Fey".
This time, we really mean it. Melodies finally reflect a certain character/person or an action taking place. So on "The Clockwork Fable", you will encounter
certain melodies over and over again - on different instruments, with different rhythms, with a different feel to it. Sometimes, we even mix up a rhythm
from a certain action with a melody of a certain character.

Having that in mind, we wrote the songs, driving the story forward. We weren't looking at times or watching boundaries - we just told a story, and a song ends when that part of the story is told…

…That led us into a 3-CD album, containing the entire, interconnected script recorded by some fantastically talented actors… but those details can wait for another time!