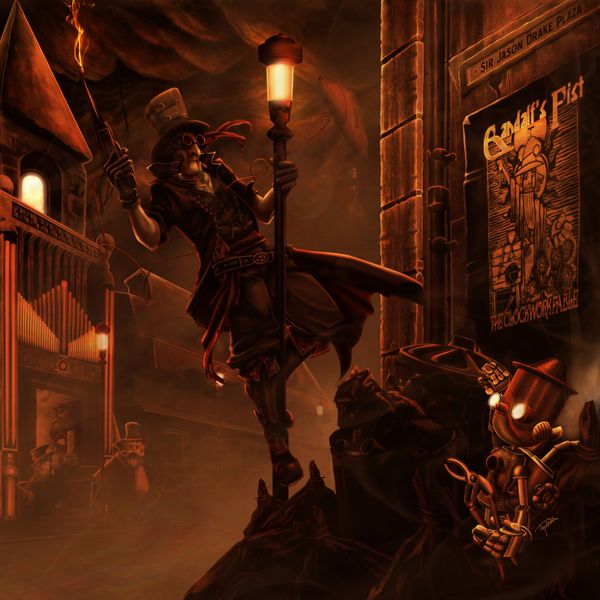 We are over the moon to announce that Arjen Lucassen (Ayreon), Blaze Bayley (Ex-Iron Maiden), Dave Oberlé (Gryphon) and Matt Stevens (The Fierce and the Dead) will guest on on our latest album “The Clockwork Fable”.

The album, which is scheduled for release on May 1st, also features artwork expertly created by German artist Thomas Huth, also responsible for 2014’s excellent cover on “A Forest of Fey”.

It was a real privilege to work with Dave and Matt again, having produced something really special working with them both on the last album, we think we’ve gone one better this time! It’s also fantastic to have Arjen on board; it must be nice for him to join an ensemble of musicians for a change and his performance is simply faultless! We approached Blaze early on in the production, so it’s great to finally announce his participation. Playing the sung part of “The Primarch” he really bosses a 10 minute epic… it sounds huge and we can’t wait for it to blast everyone’s socks off!

Dave Oberlé, drummer and vocalist for folk-prog pioneers Gryphon, who performs the sung parts of “Pastor Simon” as well as performing traditional percussion on the LP , commented:

“When Dean contacted me last year about getting involved with “The Clockwork Fable” I was extremely pleased to be asked. Especially after the success of “Forest of Fey” which I also had an involvement with. The band’s composition capabilities coupled with superb arrangements and production skills really do set Gandalf’s Fist apart from most others in this genre. I’m honoured to be asked to be a small part of this incredible production which, in places for me, has slight tinges of Gryphon. This is most definitely a band to discover if you haven’t already”.

Arjen Lucassen, Ayreon mastermind, takes up the singing role of “Armistead” and said of the part:

“I had so much fun singing this part, the music really inspired me. It really brought out the inner-Gilmour in me, guess it turned out quite ‘Floydy’. Thanks Gandalf’s Fist for asking me to be a part of it!”

Matt Stevens, guitarist for the acclaimed instrumental group The Fierce and the Dead, once again has been drafted in to provide some ambient guitar textures on the album. He said of the experience:

"I had a lot of fun making some very nasty and lovely noises with a bit crusher, octaver and odd reverb on the new record by the mighty Fist. Lovely people to work with."

The Musicians join an ensemble cast of actors, including Mark Benton and Zach Galligan, on our 3-CD concept epic! For further information and to order your copy visit  www.clockworkfable.com