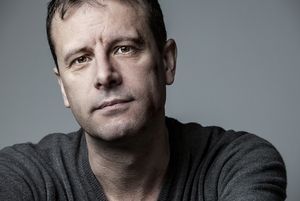 Playing the role of “Pastor Simon”, Paul has worked extensively in the world of show business for over twenty four years (to be precise). His television work recently includes rubbish guest parts in Foyles War, Homefires, Holby City, Coronation Street, Doctors, Emmerdale and in the past as the petrol-bomb-throwing racist Josh Carter in Brookside.

He has dressed up in bad costumes, playing parts in theatre everywhere in the UK and abroad including awful Roman outfits with the RSC, to playing Mr Beaver in a huge circus tent in Kensington surrounded by Narnians. He has co-written and acted in various comedy series for BBC Radio 4.

On film he can be seen in an awful vintage Chinese outfit in Mike Leigh's film Topsy Turvey and most recently working with a very friendly giant in Buckingham Palace in The BFG directed by Steven Spielberg.

Paul is a top bloke and we had a great laugh recording the parts, I bombed up to a recording studio near Crewe with my wife and dachshund in tow (both of whom were duly treated to some Burger King hash-brown bites on the M6) to meet Paul where we had a good chat about all our favourite Prog records and flew through the pages of  the script in record time. The performance was excellent, however I’m pretty sure the recording engineer, Dan, was baffled by what he was hearing! I’m sure once he hears the full thing he’ll understand ;)

Paul said of the experience:
“I love concepts and I love fantasy, I love storytelling.  When I first read the script for Clockwork Fable the first thing I admired was the ambition, the images and the world that Dean had created. The second thing was when I read my character Pastor Simon, I was in! A Steampunk priest...in an underground world, worshipping the darkness, it doesn't get more Prog than that! Trying to capture that in a studio in Cheshire on a dull, grey Saturday morning was a challenge but I was clear on the style and character and Dean just told me to do it better if he thought it sounded shite"

The role of the Pastor is an interesting one, he has an air of control over the whole plot, however does not fully understand his manipulation at the hands of the Primarch. As with many of these characters, he definitely deserves his own spin of album (or twelve!)

Paul has his own company “Goofus” who love work that is stupid, surreal and moving. Check it out over at www.goofus.co.uk